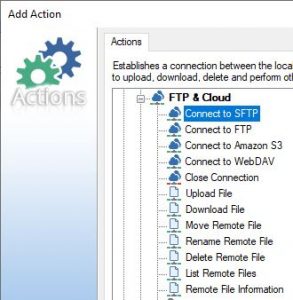 Automation Workshop 4th version is another major milestone that brings a completely redesigned user interface along with new cloud actions and triggers. As Windows 7 EOL is approaching rapidly, we have aligned the user experience to the new UI paradigm that matches Windows 10 and Windows Server 2016/2019 user experience. While the new interface looks very modern and gorgeous, it does not add significant overhead to the very small memory footprint Automation Workshop has. We have even improved some code, so the newest version require event less memory while running complex tasks.

Triggers
We have crafted four new triggers that can monitor Amazon S3 file service or any FTP server, be it Linux or Windows based, with the latest security standards right out the box. 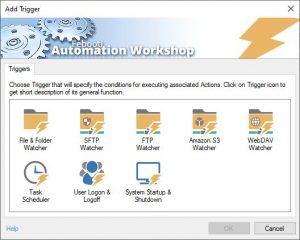 Actions
With our new FTP & Cloud action you can manipulate remote files in easy and secure manner. These actions are solid addition to Automation Workshop’s already existing comprehensive set of file and folder manipulation actions. 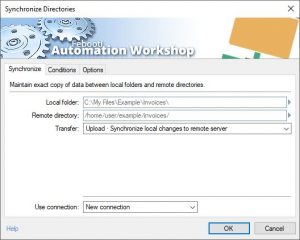 Desktop shortcut
We have heard your feedback! It is now possible to create a shortcut to the task on your desktop. Launch a task with a simple click on your desktop, without opening Automation Workshop every time you need to run a task.

As the Windows versions rapidly move on, we have also dropped support for .NET 2.0 and .NET 3.0 frameworks. Official support for Windows Vista and Windows Server 2008 R2 are also ended.

New Website
As you may already noticed, the febooti.com website has also been fully redesigned, it has more pleasant typeface and it is fully compatible with the latest mobile browsing standards.

Stay with us, the year of 2020 will bring many more new features!

It was just four years ago when we launched freeware version of Automation Workshop and at that moment the download count of commercial version passed over 300,000 mark.

We are very excited about accelerated growth of our flagship product. It took more than 3 years to achieve 100,000 downloads. And our free software offering clearly expanded our user-base behind what we have initially planned. What now? Setting a new goal – 2,000,000 🙂 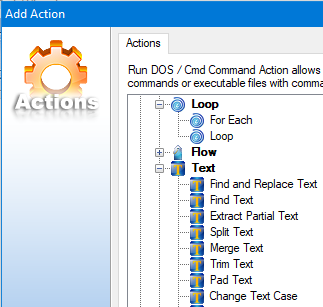 We have just released Automation Workshop v3.0.0 which introduces 18 new actions in three categories – addition to the File / Folder category, as well as brand new – Loops and Text categories. Long requested actions for text string manipulations and loops are finally there. Now it is possible to use custom named variables and tokens from Split text action. This release also focuses on many improvements and a few bug-fixes. Read detailed information in Release notes for v3.0.0.

Here is a screenshot from Split text action, that is very handy when extracting data from CSV (comma-separated values) files, or when need to get values embedded into filenames.

Some more highlights below…

Introduces Operations manager which collects all the important data in one place, and provides summary overview on Automation Workshop status and overall performance. There are numerous other fixes too. See the Release notes for the full list.

We have just fixed one nasty bug in the Setup file for Free Edition of Automation Workshop. It prevented running Example Tasks, and tasks that uses Dialog Boxes under Windows 8, 8.1 and Windows Server 2012, 2012 R2, if Microsoft .NET Framework 3.5 was not manually installed. Version number stays the same 2.3.0 – there are no other changes, only the Setup process was affected.

This version adds two new Wait actions. Wait for file and Wait for time. See the screenshots below. Also, improvements for the PowerShell scripts – it is not necessary to change Execution Policy to run PowerShell scripts from the Automation Workshop, Execute Script action.

There are certain limits of file name and path lengths in the Microsoft Windows. These limits are very high for most practical purposes, thus not encountered very often, and because of that, are somewhat vaguely understood. In this discussion I am mainly going to refer to NTFS file system as the currently most advanced file system supported by Windows (some parts or this article may also be true for FAT32 or exFAT); and Unicode as UTF-16 or in some places may be UCS-2 (only 65,535 chars). One well known limit is that filename cannot be longer than 255 Unicode symbols. Another popular limit is 260 Unicode characters – maximum whole path length under Windows.

By putting these two constants together you can model various examples of path limits, for example, you can create the following paths:

So how many is these 65,535 symbols/characters? As you can see in the above examples, the whole Wikipedia article (average English) fits into path name, even when every word is separated with backslash character (\). And actually you need to separate words in the path with backslash, because of each file / folder name has a limit of 255 characters.

If you try to create such file, folder or path in the Windows Explorer, you won’t succeeded. Windows Explorer won’t let you do that, and it may not show any error, it simply may limit how many symbols you can enter. But this part depends on the Windows version. For example, Windows 8.1 Pro sometimes show an error:

Even latest Microsoft OSes – Windows 8.1 and Windows Server 2012 R2 cannot display / manage these folders correctly. It won’t allow you to click on the last folder that is visible, and it does not show path longer than ~512 chars. It simply does not show up, but it is there. Also, it does not refresh the folder content, so it shows the last “state”. In our case it is the same folder that we are inside. See the screenshot below:

Also, Windows Explorer does not allow you to delete such folder. It shows the following error on Windows 8.1 Pro:

Also, it says “The source file name(s) are larger than is supported by the file system…”, which is a bit misleading. It is not supported by Windows Shell, not the file system. But perhaps that message is meant for novice users, not administrators and PC experts.

Windows Shell is not the only sub-system that can’t handle such paths. For example, CMD.exe, also can not:

Even newest PowerShell gives up:

There are plenty of situations where 260 characters is not enough. For example, HTTP request has limits from 2,083 to 8,192 characters, and you want to use file system directory structure for your web application. Or perhaps your a backup application is configured to backup all user files to location “C:\Username\2014-Aug-27\Some-other-folder\” and what happens when user have already created path with a maximum of 260 characters? A Backup program should never fail, and so we must be able to overcome this limit.

What about Automation Workshop?

All file / folder actions and triggers, and many other actions and services of Automation Workshop support very long file and path names. Even more, the free edition also supports this all right out of the box. There are some limitations here and there. For example, it may be cumbersome to enter very long path in the standard input fields. However, there are very handy means to overcome this. The Variable Wizard’s “Read from file” is one of them:

Today (Aug 13, 2014) we are proud to announce the release of free edition of our flagship software product – Automation Workshop. We believe that our step will attract much more attention, and to not confuse commercial and freeware communities, we have created dedicated website for it. AutomationWorkshop.org is a new official home for Automation Workshop Free Edition.

When you visit AutomationWorkshop.org, the first thing you notice is the counter, besides that it is very beautiful site with very pleasant typography. The counter does not show zero as you have expected for the software that has just been released. It shows a little more than 300,000 downloads.

The count comes from all Automation Workshop downloads, not just these of Freeware kind. We celebrated 100,000 downloads a little more than two years ago. Also, the version number is not v1.0, but the same as for commercial version – v2.1.0. File is signed with cryptographic certificate and some popular cryptographic hash check-sums are provided. The official download page is here.

What’s next? Get involved! Here are some ideas on how you can help us to spread the word about this awesome piece of software.

See, screenshot of the new Action running under Windows 7.